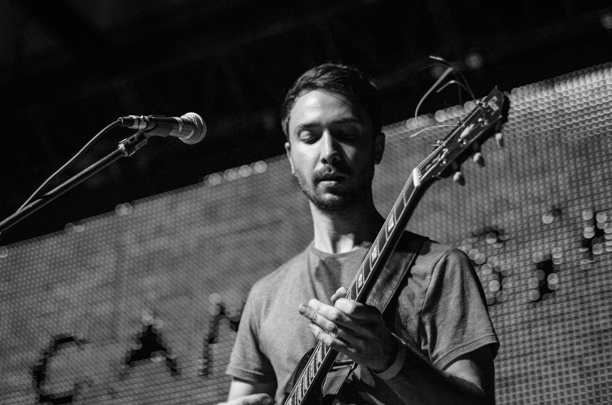 For the past 15 years, Tom Bromley has been writing, recording and performing all over the world with his band Los Campesinos!. As a self-taught guitarist, music was just a hobby until he met like-minded musicians at Cardiff University. There, as he wrote and arranged the music for the band, he began what has now become a career in songwriting.

After completing a degree in English Literature, Los Campesinos! became his primary focus and the band have gone on to release 6 studio albums along with numerous singles and EPs, as well as making high-profile appearances on TV and at major festivals in the US, Europe, Australia and Asia. Most recently their music was featured in the Netflix animated feature, The Mitchells vs. The Machines (2021).

In 2014, Tom became a touring member with the LA-based artist Perfume Genius, where he’s contributed bass, guitar and vocals to their live shows and TV performances around the world.
Between tours, he has also produced albums for Ceres, the indie rock band from Melbourne (Drag It Down On You (2016) and We Are A Team (2019)).

While his work with Los Campesinos! continues, he is now also involved in composition for multiple music houses and advertising agencies around the world, where he uses his self-taught writing and production skills to offer unique soundtracks for moving picture. He has provided music for the likes of Porsche, Remy Martin, Ford, Hyundai, Honda, Nowness, Toyota and AirBnB among many other brands and clients. And as a composer for the music house Extreme, his music is used globally in TV, commercials and video games, most recently in Life Is Strange 2, Silicon Valley, Tidying Up With Marie Kondo, Love Is Blind, Queer Eye, 13 Reasons Why, The Sinner and on the Netflix documentary First Team: Juventus.

In 2019, Tom composed the score to the feature-length Peter Lee film Angelfish (2019), featuring Princess Nokia. And in February 2021, The Map of Tiny Perfect Things (2021) was released on Amazon Prime, starring Kathryn Newton and Kyle Allen, and featuring Tom’s latest score.